The political history of Lebanon is incredibly detailed and complex. I found this pretty overwhelming to get my head around when I first travelled to Lebanon and so I wanted to give you a brief and simplified introduction – not to give my opinion on the situation – just an overview of my experience and what I learnt from talking to people. I think having at least a brief knowledge really helps your understanding of the culture and puts things into context so that you can not only be respectful to the citizens but also enjoy your time more.

The land of what is known today as Lebanon has been fought over by civilisations for thousands of years, and it’s no wonder, considering how fertile the land is. Most recently, Lebanon was a French colony from 1920-1943, the influences of which are still very apparent today in every aspect of the Lebanese culture including language, food and architecture. It’s also the only Middle Eastern country without a desert and I was shocked at how green the landscape is. Lebanon’s Cedar trees in the North have been incredibly important throughout history and ancient remains in Saida in the South are still being uncovered today. 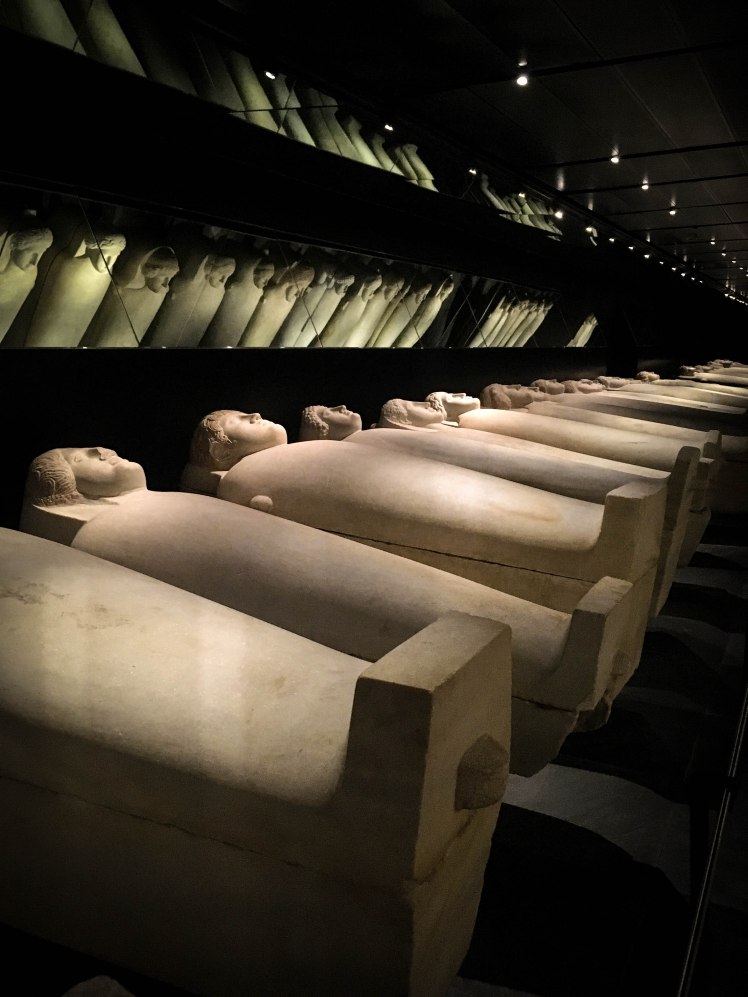 Beirut’s collection of anthropomorphic sarcophagi in the National Museum, the largest collection in the world and found in Saida.

One of the major issues Lebanon is facing in the modern day is known as ‘brain drain’. As a highly educated and qualified nation (majority of citizens will speak a minimum of Arabic, French and English), Lebanese salaries are far too low to retain their youth as many of its citizens leave to work internationally. It should also be noted that all over Lebanon there are severe limits of electricity and in Beirut there is a scheduled 3-hour power cut every single day. The majority of establishments will have generators to compensate for this, but even with a generator you will be limited as to which electrical appliances you can use, which takes some getting used to. In areas outside of the capital, some towns and villages will get as little as half an hour of electricity per day.

Lebanon is the most politically complex country I have ever been to, and this is largely owed to religion. Lebanon is an extremely religious place, but the religious practice is incredibly varied with 18 officially recognised religions practised today. This creates a very complex web of ties and tensions between different religious sects. This complexity is demonstrated within government, whereby (at the time of writing) the President is a Maronite Christian, the Speaker of the Parliament is a Shi’a Muslim and the Prime Minister is a Sunni Muslim. Amongst Lebanese citizens, Islam is the most common religion, followed closely by Christianity. This religious atmosphere even infiltrates the architecture; in downtown Beirut you will find the famed Mohammed Al-Amin Mosque right next to the Maronite Cathedral of Saint George – neither of which is allowed to be taller than the other.

The cross at the top of the Cathedral can be seen directly behind the Mosque.

The variety of religion in Lebanon also means a lot of public holidays! There are currently 19, each attributing to a different religious custom. I’d recommend checking if any public holidays fall over your time of travelling to Lebanon as it may effect your plans quite significantly, but it may also be quite easy to avoid. For example, if you will be in Beirut on the day of an Islamic holiday, you can spend that day in the Christian areas so that you are not stuck with nothing to do. There are many religious festivals celebrated across Lebanon and Halloween is celebrated twice, firstly on 31st October along with the rest of the world, and secondly on 4th December. This is known as Eid il-Burbara or Saint Barbara’s Day and follows similar traditions to Halloween. Christmas is a wonderful time to be in and around the mountainous areas of Beirut; the Christian communities create stunning displays of trees, decorations and lights all through the towns and villages.

Today, Lebanon and in particular Beirut is incredibly liberal, particularly in terms of sexuality. There’s a multitude of gay clubs and in 2017 Beirut hosted it’s first gay pride, known as Beirut Pride – the first of its kind in the Arab World. Having said this, there are still severe issues surrounding homophobia in Lebanon and in 2018 the pride organiser was detained and forced to suspend the activities. It therefore cannot be denied that members of the LGBT+ community face many difficulties, but I was certainly surprised at the openness of Beirut compared to other Middle Eastern cities.

An art piece hung in the front window of an art gallery on Gouraud Street – not what you expect to see in the Middle East!

Despite being a modern, forward thinking society, Lebanon has faced many tensions and clashes in recent years. The Lebanese Civil War lasted from 1975 to 1990 and remains to be a very contentious subject today. Everyone you speak to will have their own version of events and opinions and it’s quite impossible to get an impartial explanation. Be mindful of this when speaking to people, particularly as many lost their friends and family members in the war and this is still a fresh memory for many people. Another conflict to be mindful of is the Israeli-Lebanese conflict, or otherwise known as the South Lebanon conflict. These tensions have existed since the establishment of the state of Israel and clashes still continue today. The most recent and significant of these clashes was in 2006; largely between the Israeli Defence Forces and Lebanese militia group Hezbollah. It is important to keep this tension in mind when travelling to Lebanon as clashes could escalate on the southern border at any point.

Tunisian artist Elseed’s graffiti opposite my apartment in Beirut

Effects of the wars can be seen particularly when walking around Beirut, whereby abandoned buildings have been left to crumble when the inhabitants fled from war. It creates a fascinating contrast between beautiful, old French style mansions and modern architecture. You’ll also see a lot of graffiti when walking around the streets of Beirut, some of it political. I truly didn’t stop learning for the entirety of the three months I spent living in Beirut, and everyone you meet will have their own piece of the puzzle to add. It was fascinating and despite the tensions I’ve talked about in this post I really want to stress that I felt completely safe the whole time I was there. A complex political history and even current situation shouldn’t be enough to put you off travelling to a country and if anything, for me, it made Lebanon all the more enchanting.

2 thoughts on “History & Politics of Lebanon”