I decided to put these two major cities together in one post because not only are they close in proximity, but are relatively similar in scenery. In fact, the trip from Casablanca to Rabat on the train (Morocco’s train company is ONCF) takes between 1-2 hours travel – so long as everything is running on time. Which, frankly, isn’t often. I strongly recommend adopting the Moroccans’ laid back mentality here, as the trains can be quite a nightmare. It’s best to allow yourself plenty of time to travel rather than sticking to a strict schedule! This is particularly the case around the time of national holidays such as eid (Islamic holiday) where everyone is looking to travel.

I took a single trip to Rabat, spending two nights in the capital. I really loved the city and felt that it had a lot to offer, the beach at sunset is a beautiful sight, particularly if you walk out along the breakwaters and watch the waves crashing. I stayed in the Rabat Agdal area, but there are about 4 different train stations that you can use in Rabat to get around the city, in addition to the metro or petit taxis which are found in all Moroccan cities (these are blue in Rabat!).

Graffiti in Agdal – there is a lot of beautiful graffiti to be found around the capital!

Sunset in front of the Kasbeh

My favourite part of the trip was the Kasbeh des Oudayas and the Andalusian Gardens. The Kasbeh dates back to the 12th century and is an ancient fortress which was used as accommodation for leaders and a defence base when under attack. The walls of the Kasbeh are high and mostly painted a mix of white and blue, but the winding, narrow streets are worth pursuing to uncover the panoramic view. The old medina of Rabat is relatively small and runs just behind the Kasbeh. I also paid a trip to Rabat’s zoo, which is something I definitely recommend if you have a spare few hours. It is slightly awkward to get to and you may have to use a grand taxi to find your way back into the city but it’s worth the expense. We even got to see the Barbary lions which are native North African lions, specifically to the atlas mountain areas, but are no longer found in the wild.

Our furry guide leading us round the Kasbeh

Main street in the city centre

I’ve visited Casablanca twice over the past year, and this was all due to the mosque. Hassan II is a stunning piece of architecture; in fact it is the largest mosque in Morocco and was built in 1993 costing between $400-$700million. Set on the beachfront, this is one of the only mosques in Morocco that is open to non-Muslims and so we were very excited to take a peek. However, after having travelled 5 hours from Fes in December we found that the mosque was in fact closed to everyone on that day as the king was going there to pray. But, of course, I wasn’t going to let that stop me. So, upon my return to Morocco in June I took another trip to Casablanca. In my opinion it is totally worth travelling to see the grand mosque, covered in intricate mosaics, marble and carvings. You can pay for organised tours of the inside during the morning, otherwise you are limited to looking around the outside and only peering inside. 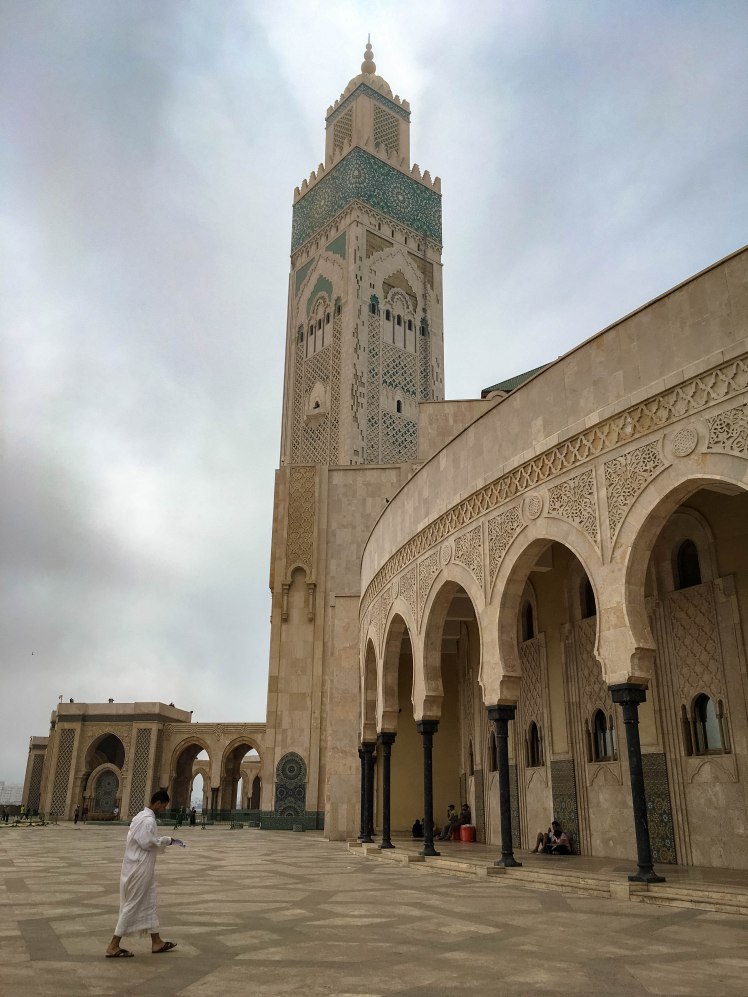 Casablanca is a large city and even in petit taxis it can be expensive to get around. If you’re into your shopping then you absolutely have to pay a visit to Morocco Mall – the second largest shopping centre in Africa (you can see why the city is known as the trade capital!) with hundreds of stores across 3 floors, an expansive food court, an ice rink and the best part of all – a cylindrical aquarium with a central elevator – in the middle of the mall! It gets better, for a ride in the elevator amongst the fish it’s only 20 dirhams (about £1.50) and I’d say this was the highlight of my day, there’s even the option to scuba dive in the tank.

A view of Morocco Mall… From inside the fish tank! The abstract tree was a really beautiful instalment for Christmas 2016

As for evening entertainment, I recommend the James Rooftop bar for either a soft or alcoholic drink, its about 70 dirhams (around £6.50) standard price for a soft drink but it’s worth it for the views and atmosphere. There is also nightlife to be found in Casablanca, however, I unfortunately didn’t get to experience this. My first visit was during winter when most establishments (such as beach front bars) are closed, and my second during Ramadan (the holy month of fasting for muslims) where alcohol cannot be sold or bought from any establishment for the duration of the month.

As I mentioned earlier, the two cities are relatively similar when walking around but I have tried to show in this post that they also absolutely have their own unique reasons as to why they both deserve a visit. There is a lot of opportunity in both cities if you are interested in work – particularly for business in Casablanca.   In order to properly explore I’d recommend visiting each for 2-3 days in each and if you have any questions about either of these diverse cities, feel free to contact me!